Hello Everyone!! My goodness what a week it has been! Last week my good friend and neighbor Jennifer generously offered to do a scan for us on Saturday to find out the gender of our sweet Baby K. I have never been so anxious in my life. I barely slept the whole week and was WIDE AWAKE Saturday morning at 7 (even though the ultrasound wasn't until noon).

Immediately we were taken aback by how much development the baby has done since the last ultrasound at 8 weeks. There were the CUTEST hands, feet, and little legs. Everything was measuring great, even a bit ahead! Baby K, however, did not want to reveal its gender. Stubbornly the baby kept moving but kept its legs crossed (would even stick a leg out straight but kept the other crossed over). Jennifer was able to finally see the gender confidently. My Mom was the only person allowed to look at the screen for the gender and boy did she have a secret to keep that day! She wrote in an envelope what the gender was and we headed off to get ready for our BBQ.

My friend Rebekah and I went to Party City and left them with a box to fill with balloons! That night we had planned a small family/friend BBQ to all find out together what the baby would be. The food was AWESOME (Prime Rib, Ribs, mac n'cheese, hashbrown casserole, buffalo chicken dip, asparagus, etc) but everyone was really just waiting on us to open that box up. I didn't over-do it but I did have some fun details. 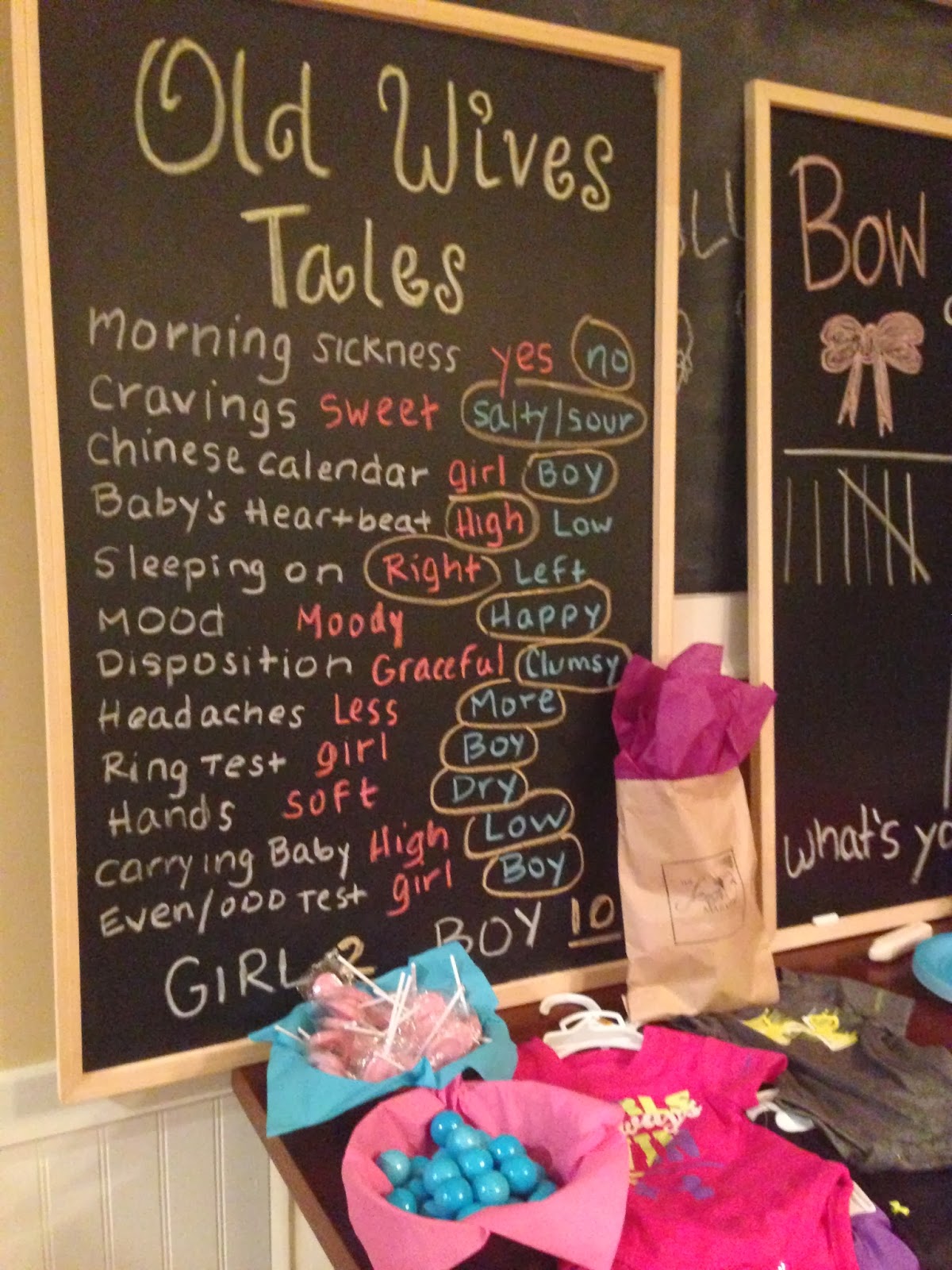 As you can see almost ALL of the Old Wive's Tales point to BOY (we also had blue gum balls, pink lollipops, and an under armor outfit for each gender). 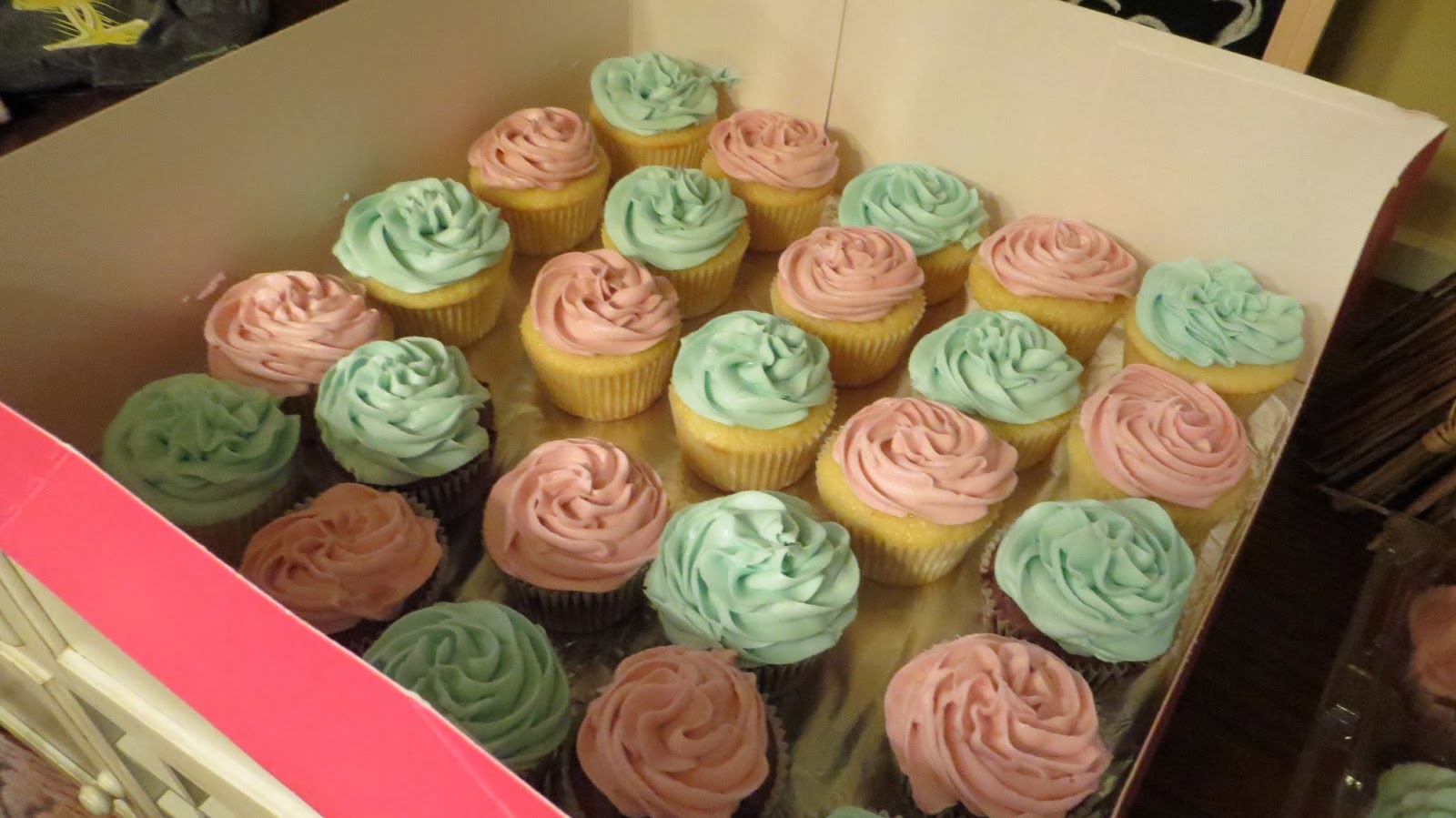 My husband's cousin Nancy made these AWESOME cupcakes. I almost ate one before dinner (Don't Judge Me!!) but good thing I didn't because she filled them with the color of the gender!! (My Mom texted her) 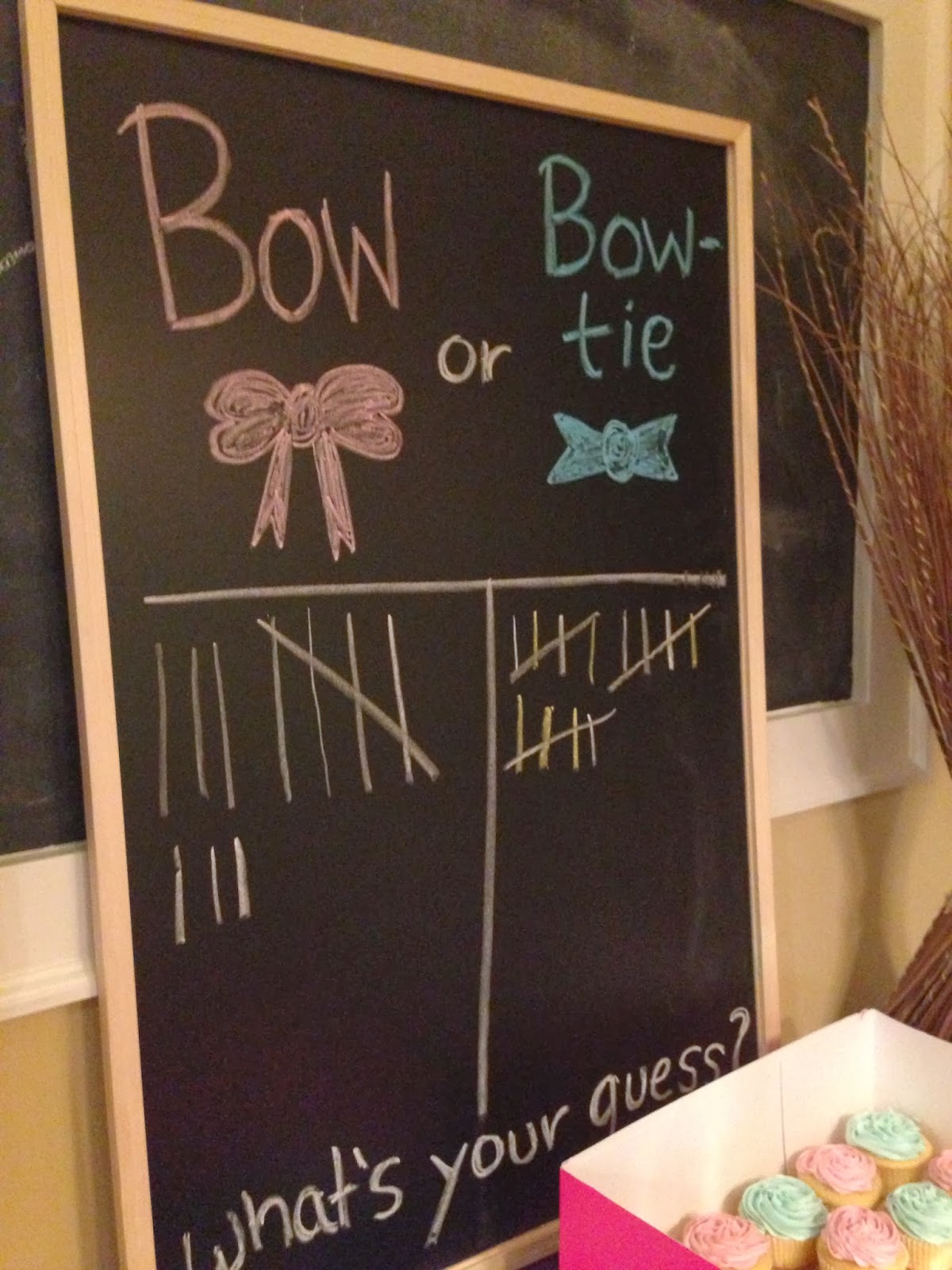 This was the final tally (not everyone voted), and as you can see, most thought it was a boy although some did change their mind to girl. Not sure where all these girl votes came from because EVERYONE including me was convinced it was a boy! 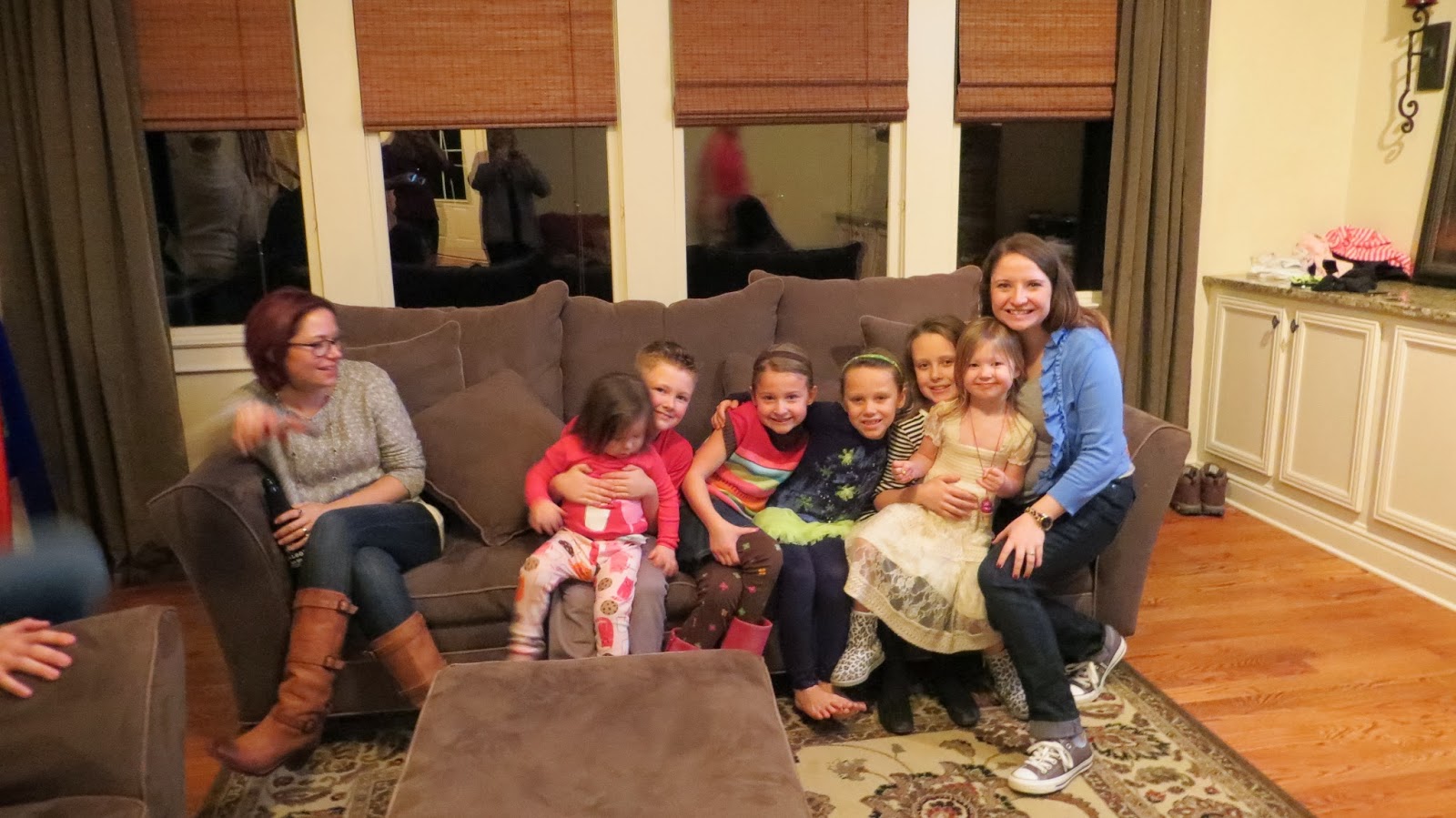 My precious angels and I! As you can tell we are really low on the boy count!

My Husband brought out the box and everyone waited as we cut it open. Right before it opened all I could think was "It is going to be BLUE BLUE BLUE!"

It is easy to see that we were SHOCKED!!!! And of course, the kids LOVED the balloons and the box. 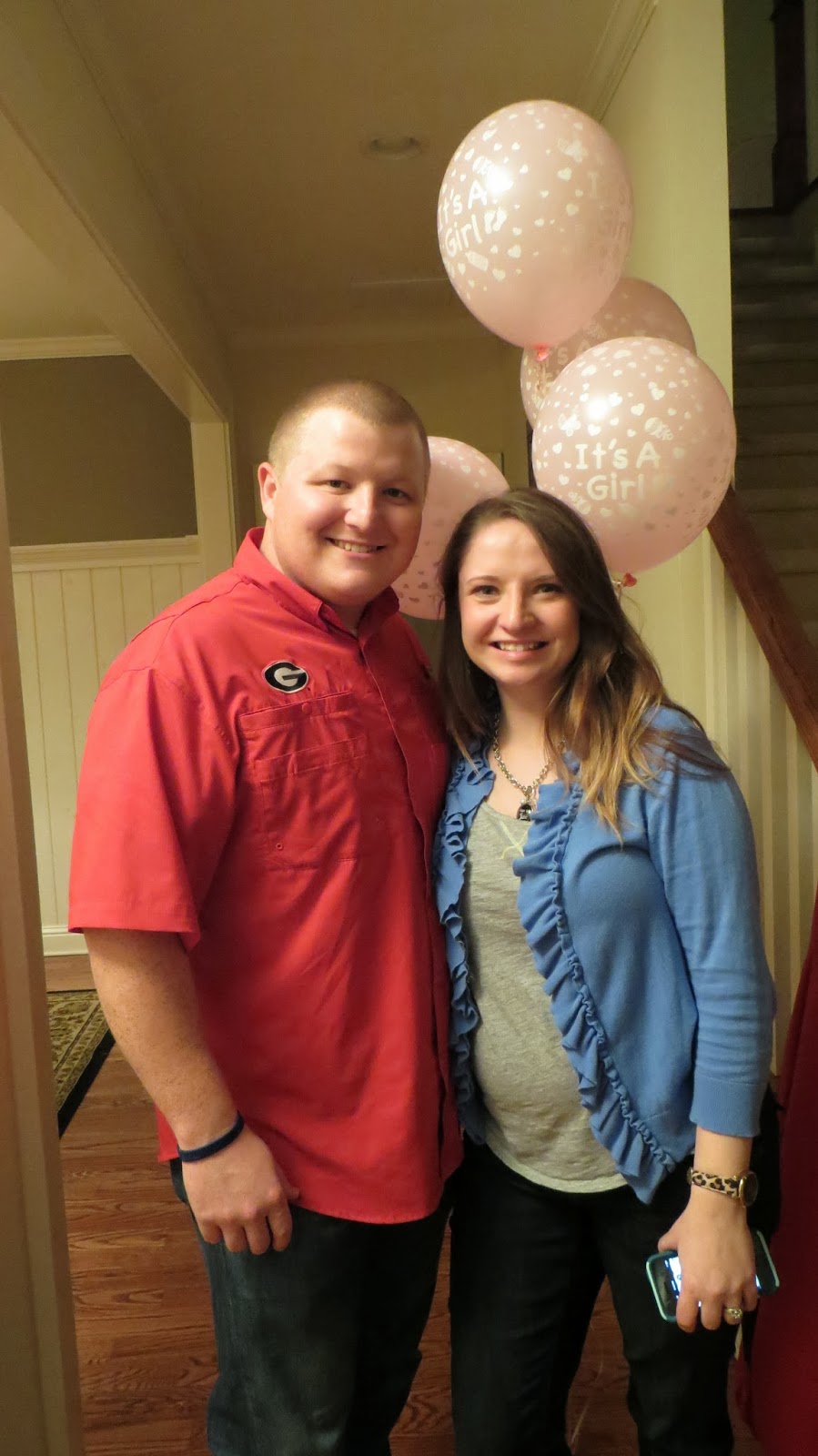 We are now TEAM PINK! 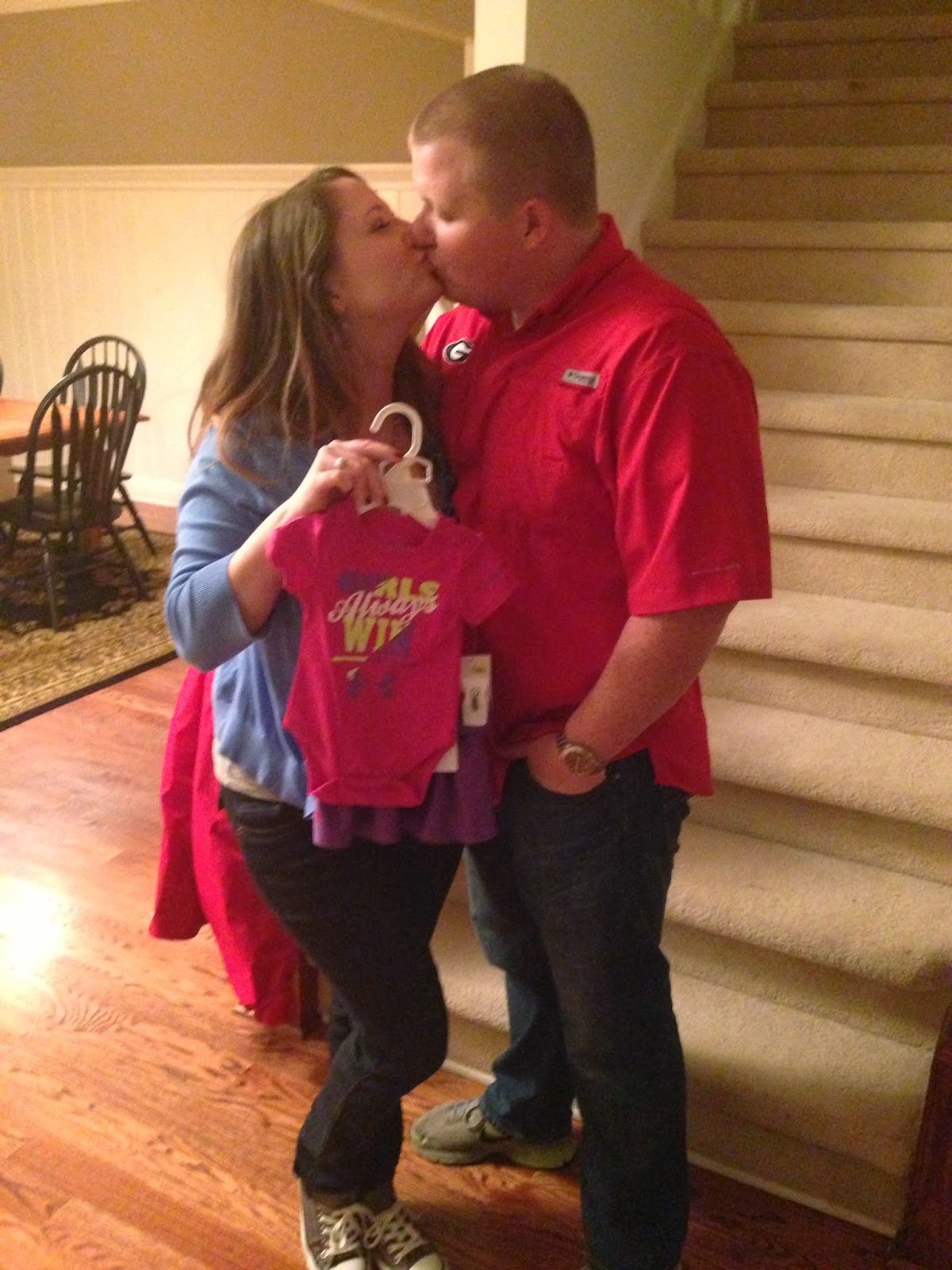 With our Under Armor outfit, it says, "Girls Always Win," and this time they did! 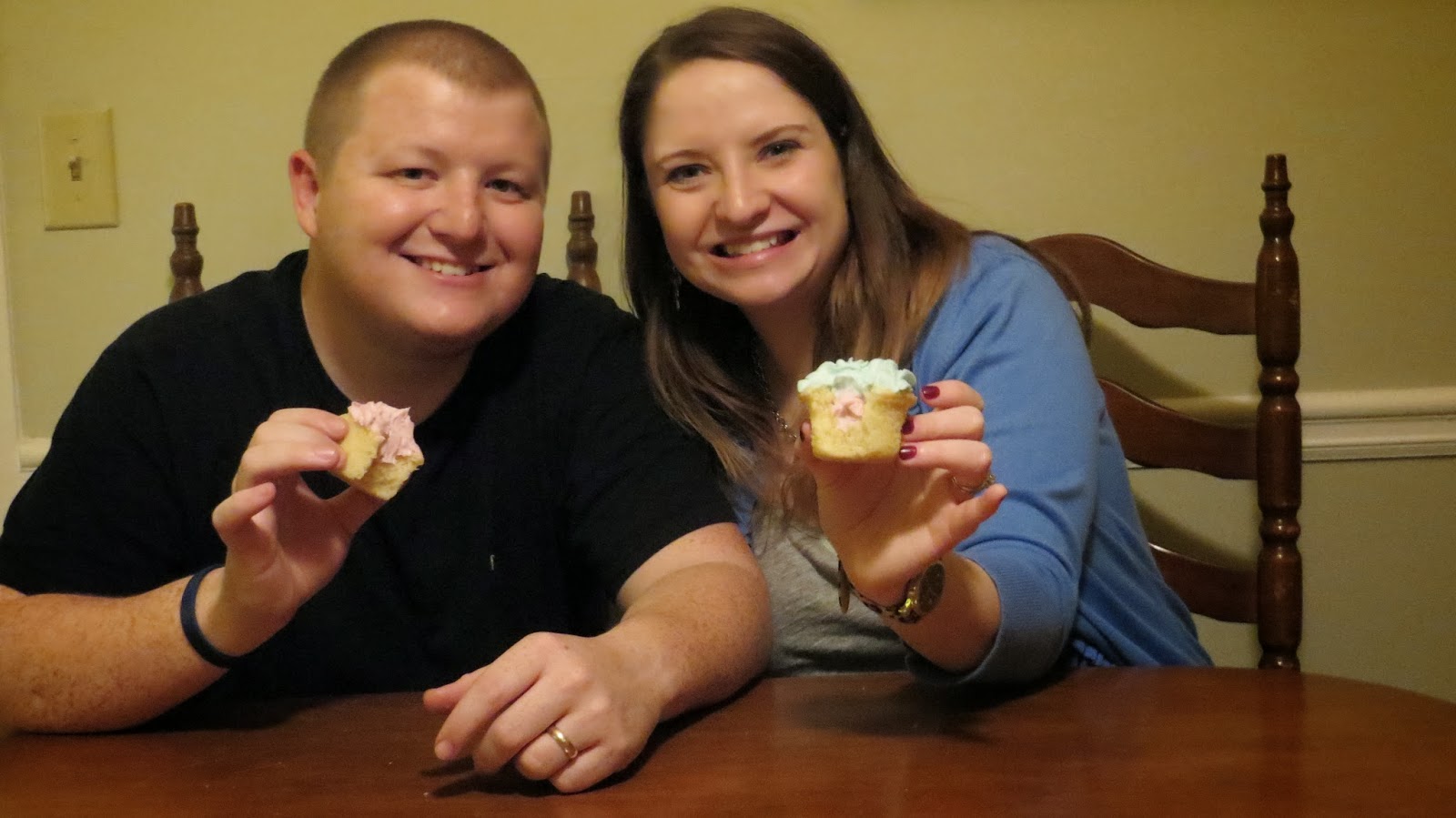 AWESOME cupcakes with PINK inside! Thanks Nancy!!

At first I honestly felt TOTAL shock. Travis and I both cried because we were so happy and because it is all so real now! That night was great and I had thought if pink balloons came out everyone would be disappointed but it was the opposite we were all shocked but very happy.

Days later I have really had time to reflect on it all and the disbelief diminishes each second. Now it just feels so right, no matter how much we are lacking little boys in the family!

I feel like my little girl and I have really connected. I didn't expect her this time but in a way I have been expecting her all of my life. Ever since my best friend died when I was young I knew that I wanted my first girl to be named after her. The thought of me actually getting my wish is simply amazing. 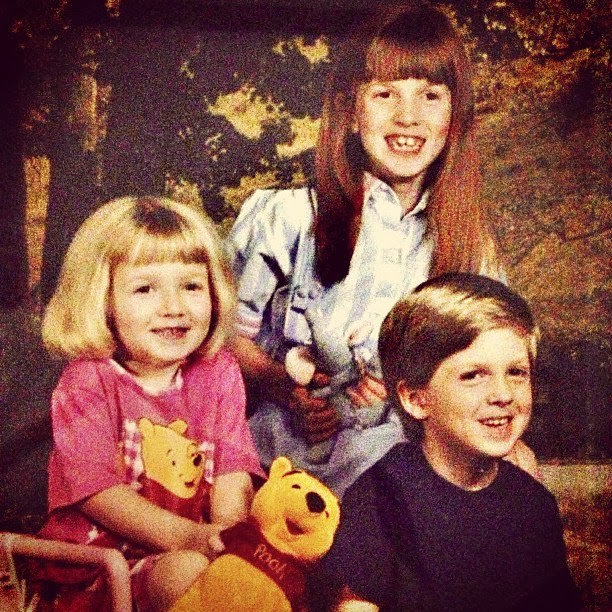 What can I say about Amie? Amie was the gentlest soul I have ever known. She was goofy, sweet and such a kind spirit. We had many wonderful times together and I just knew that we would be friends for life. She was so much deeper than anyone I had ever met. Other young girls were thinking about music, glitter and fun while Amie respected the finer things in life like family and true friendship. Devastatingly she suffered with a brain aneurism and struggled in the hospital from January to April when she passed away. I will never forget her love for sour cream and onion chips, they are hard for me to eat to this day. The last conversation we had before her aneurism was much like the deep conversations we often had but this one is marked in my brain. She asked me if our families know how much we love them. She also asked me if something were to happen to us would they know that we loved them and God so much. So many children don't think this way, I truly believe she was a blessing that God meant to change the lives of those around them. Sadly her life was too short.

Not a day has gone by that I haven't missed her or wondered what she would be like today. People come and go but this girl changed my life forever. I have always been more mature than others and I owe this to her. I gave the eulogy at her funeral, a tall feat for such a young girl.

I think about this little girl in my belly and I think about Amie. It tears my heart apart but in a good way. I love my precious girl so much and I pray that she is JUST like the girl I am naming her after. Gentle, smart, kind, thoughtful, and goofy; I cannot think of a better future for my sweet girl. What a blessing it is to have known such a dear soul and now have one on the way.

I didn't picture a girl this time, I thought for sure I would be picking out blues and cleaning off dirt. I never thought I would be preparing for pink, painted nails, princesses and shoes! But I am so glad that I am.

This poor girl's Daddy is in for it. She already has him wrapped around her finger.

We are so blessed by our sweet Amie Grace King! 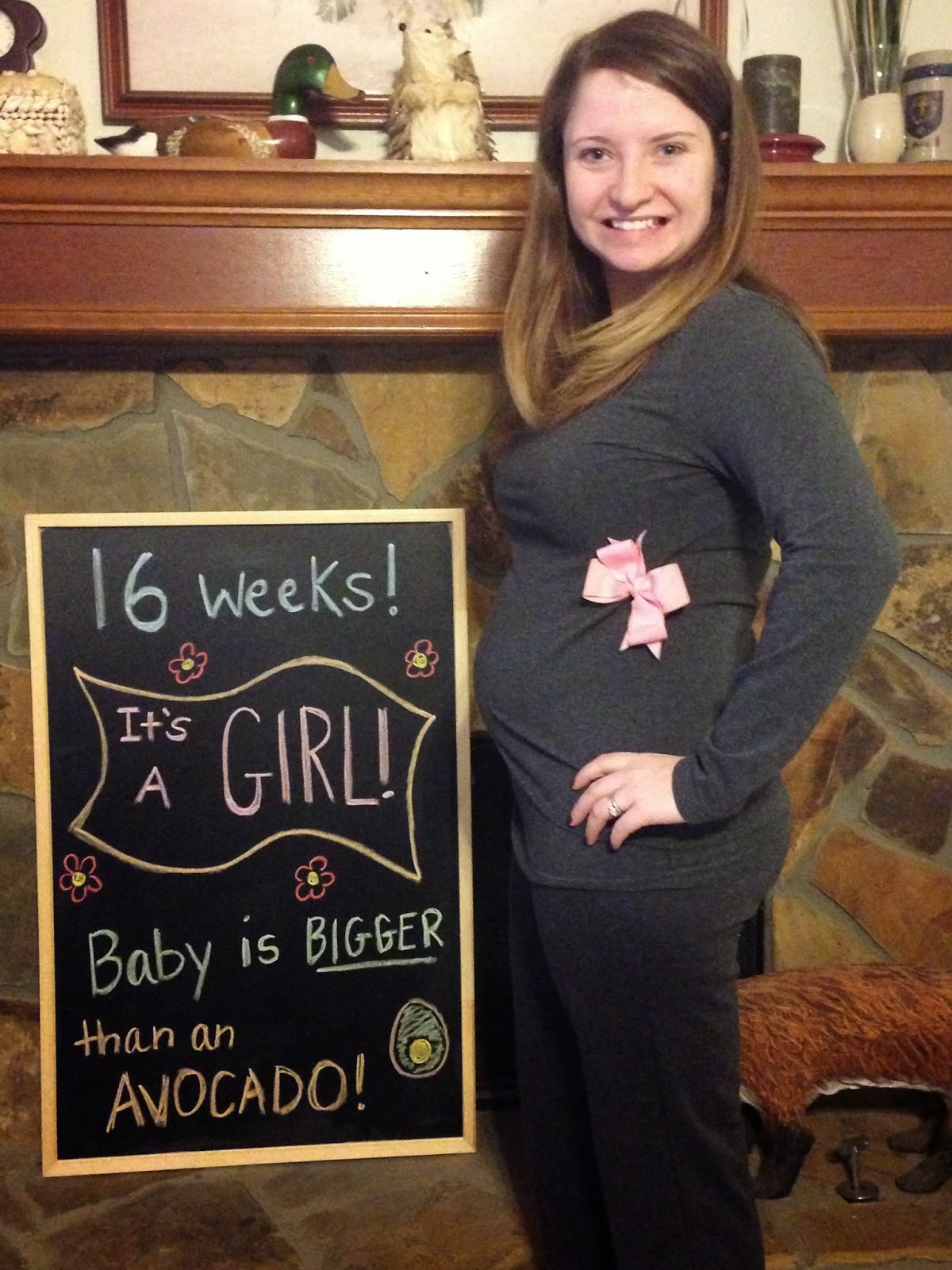 Ignore my no-make-up face! Ah, oh well, I am sure more modesty will go out the window before this is all over! But LOOK at how high that girl has moved up!!

16 weeks and 5 days! I am a little behind on the Bumpdate, we have been very busy.

Baby K is about 4.6 inches long and weighs 3.5 ounces (according to the Bump). From head to bottom (not including legs) Baby K is about the size of an avocado. However, at my ultrasound the weight was closer to 6 ounces and the measurements were a bit ahead of schedule J

None so far. I have been using Bio Oil and Coconut Oil. Hoping to keep them away (although there isn’t a lot of hope).

I have been having some definite growing pains in the muscles of my stomach. My torso is so short, this little baby doesn’t have anywhere to go but out! Also the other night I had TERRIBLE heartburn. It felt like a heart attack! I have been prescribed meds for this now but I am thinking this little baby might have some hair!

I have been sleeping well except for the weird dreams and heart burn.

We got to see our sweet baby and everything looked great! Those were the cutest legs, feet and hands I have ever seen!

Have you told family and friends?

Sometimes I can feel very light little flutters, especially after coughing but it is not consistent. Can’t wait to feel real kicks.

Anything making you queasy or sick?

Not really. Stuff on TV can make me queasier than it used to.

Have you started to show yet?

A good bit. I think my abs aren’t ready to give up control since this is the first though. Some days the belly disappears a little bit though.

GIRL!!!!!!!!
I cannot believe it, we cannot believe it! We all thought this baby was for sure a boy! She was being super stubborn when my friend Jennifer did the ultrasound and kept crossing her legs but Jennifer was finally able to see.

Belly button in or out?
In, but it is making it’s way out, getting shallower!

Wedding rings on or off?

On and LOOSE surprisingly.

Happy or moody most of the time?

Seeing the Doctor tomorrow and getting some questions answered. I also have an anatomy scan on Feb. 6th!!

RG King
While my story is still being written, the storyline thus far has proven to be a wonderful fairy tale! In 2012 I married my best friend (since age 13) and we couldn't be happier. In 2013 my husband became a Law Enforcement Officer and although we lost one baby to a miscarriage, our RAINBOW baby soon followed! We are now parents to an adorable little girl named Amie! For now I will continue writing through each beautiful new adventure!